October Weather in May

I woke up this morning, grabbed the gear, and fired up the diesel (ouch that hurt the wallet).  The goal was McDonald's by 5:45am to meet up with a great guy and new found friend.
Bret and I have been talking for months about trying to make con
nections on the water.  What brings us together is none other than our love for the sport of fly fishing and the guiding that often takes our free time.
With the main Steelhead season over and everyone shifting gears to summer haunts, we decided we would try to make it happen in the small window
that was offered to us.  Brett was making preparations to head out west for the summer to guide in Wyoming and I am, well, um, I, uh, well, I'm staying here :(
Well, I guess that isn't entirely true, as I will be heading into the mountains of California again this year in pursuit of Browns, Bows, Brookies, and the infamous Golden's.  But you know how it is....the grass is always greener.......
At any rate, we finally made connections at McDonald's in the heart of Steelhead Alley.  We decided we would hit a lower section of Conneaut Creek and see what Steelhead were left over and what Smallmouth we might entertain.
With the unseasonably cold temperatures, people have been fishing for Steelhead throughout the month of May.  This morning temps were in the high 30's in some areas and I can remember my conversation with Brett early in the morning moving toward how cold our hands were.  It definitely felt like late October or even early November.
We did find some fish remaining, but they were few.  We got one Steelhead and missed several others, and even had some fun with some other species of Bass.
Everything we caught was on swung streamers employed with spey casting techniques.  As they say, "The Tug is the Drug," and we love our switch rods.
Here are a few photos I took of Brett while I was guiding him....(sorry Brett, I couldn't resist).  Really, Brett held his own very well, and I look forward to the next time our paths cross on the water.
Brett With A Nice Late Season Steelhead 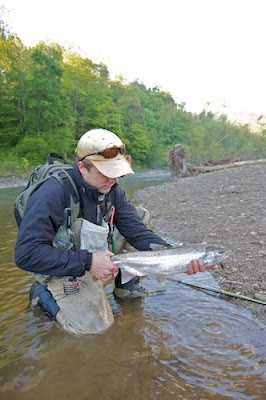 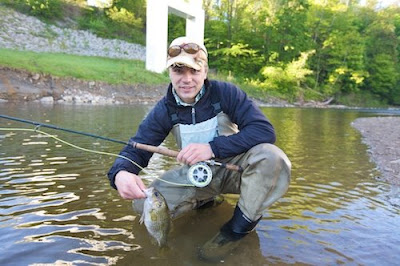 A Nice Smallmouth to Pass the Time 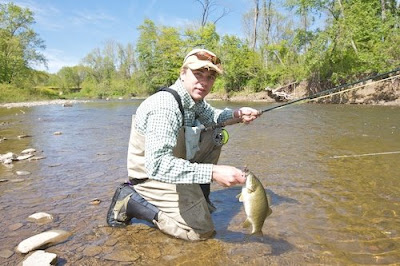 We decided while out today, that the only thing Brett needed to complete his Steelhead Alley slam was a sucker and a goose.  Unfortunately we couldn't bring either to hand :)
Be safe out west Brett, and keep us posted on those nice butter bellies your cathching.  Oh, by the way, the pleasure today was all mine!
Tight lines.....
Patrick "Flybum" Robinson
Check out other adventures at www.flyfishblogger.com/flybum
Posted by Steelhead Alley Outfitters at 7:00 PM