The start of the new year has everyone excited for the up coming spring steelhead runs! We have been able to stay busy and fight off the cabin fever by tying and speaking at local events.Tomorrow and Saturday Pat will be speaking and giving a steelhead presentation at the Great Outdoors Sportsman Show in Medina, Ohio and on Sunday I will have a booth at the AAA Travelganza at the Pinnacle in Maumee, Ohio. Info for both events can be found on the side bar of this blog if you are interested in attending.

While some of us were tying fly orders and working area events, a few of the guys had a chance to get out and do alittle steelhead fishing yesterday. I was pretty jealous I couldn't get away, and to add insult to injury the guys made the trip out to the Delaware River early this month trying their luck on some big brown trout... You can see their results below... 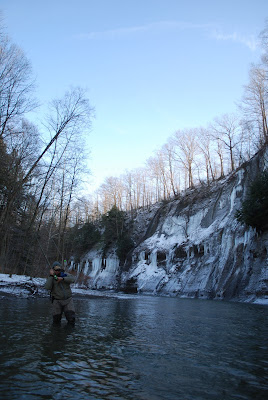 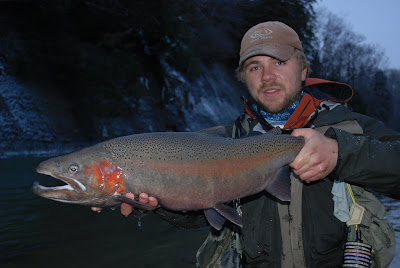 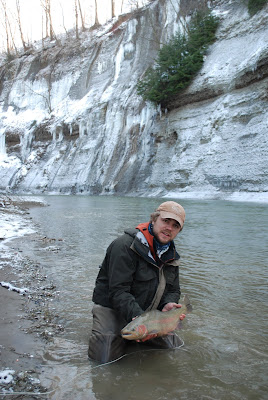 Another good fish to add to an over all great day on the tribs. 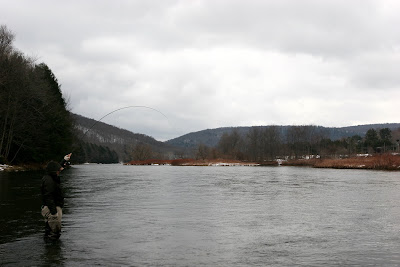 Brett hooked up with a Delaware River brown Trout.. The guys were fishing large streamers and were able to move alot of big fish during their stay. 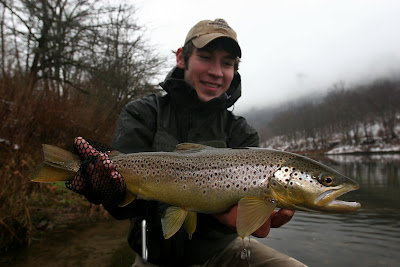 Can I get a few flies to go with that steelhead?

This past weekend I was invited to give a fly tying class at Colton Bay Outfitters in Ann Arbor Michigan.(http://www.coltonbayoutfitters.com/) First off I would like to thank each and everyone of you who attended my class, and I had a great time talking and tying with everyone involved. It was a fun day and I can't thank the CBO staff enough for inviting me to their shop...

The fly tying class was focused on tying custom streamers, sculpins, and tube fly designs for Lake Erie Steelhead, Trout, and Small Mouth Bass. We had to throw in a stone fly and egg pattern to round out the day, and I believe everyone left with a dozen or more patterns... We will be tying and giving presentations at several more events this year, and all information can be found on the side bar of this blog if you are interesting in attending or just stopping by to say hello.

We are very sorry we can not attend all of the great functions, shows, and events going on this year, but we do appreciate all of the phone calls, invitations, and good conversation from everyone. This year has seen our staff busier than ever and our businesses in Fly Bum Media, Jag Fly Company, and SAO are steadily growing larger and busier each year. This has put alot of us on the move across the Mid West and North East constantly for 12 months of the year! Fly fishing is our passion and we are doing everything possible to share that professional enthusiasm and love of this sport with all of you each season... 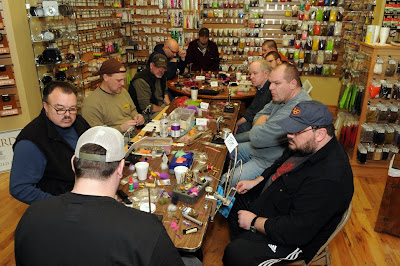 A full class on tying tube flies, streamers, and sculpins at CBO. 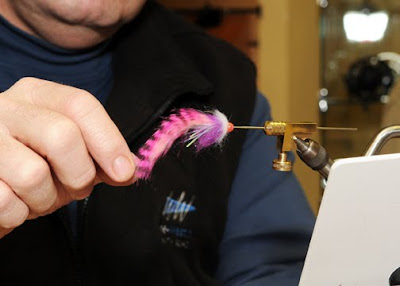 All tyer's involved in the class put together some beautiful fly patterns using Eumer tube fly vises and materials! 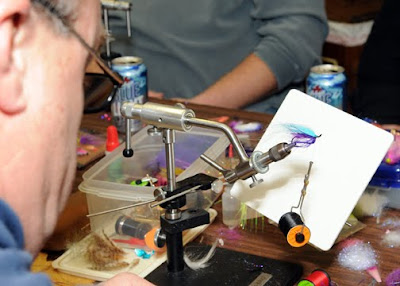 Putting on the finishing touches an a Senyo's GL Spey Minnow. 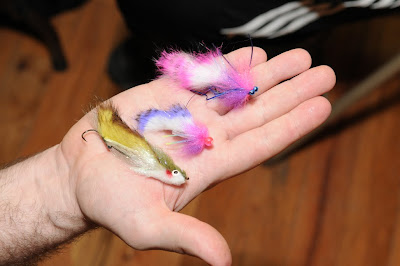 Patterns tied included everything from the Sick Puppy streamer, Senyo's Ice Man Minnows, Salmon Parr, articulated minnows and sculpins, Egg Sucking leech and goby tube flies, Senyo's Wiggle Stones, GL Spey's, and Egg patterns.
Well you can't tie flies and not have a few fish pictures!! Here are a few pics from SAO Guide Mike Schultz and CBO Guide Eirik Vitso. The guys spent the day on Lake Erie's most western tributary the Huron River with stellar results.
If this warmer weather trend holds true for awhile we will hope to have a few more January Steelhead to calm that cabin fever!!! 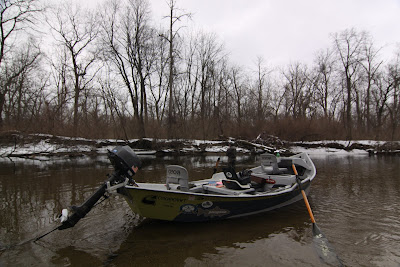 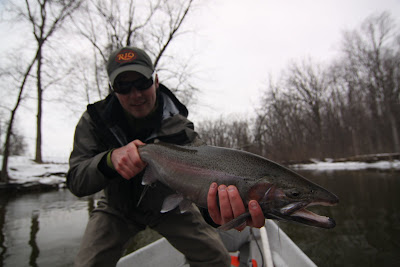 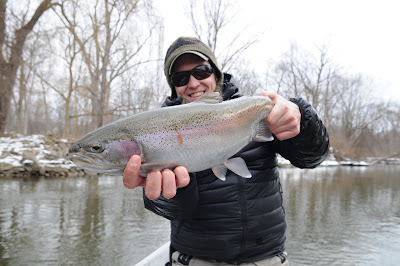 A New Year Started Off Right!

Well, it is 2010 already and all I can say is WOW! If the rest of the year goes as fast as the first two weeks, it won't be long before we are watching another ball drop and wondering if we did anything of value with our lives in the last year.
For SAO, 2009 was a banner year! More bookings than ever! More destinations than ever! And a new and improved SAO now in partnership with many shops across the region. 2009 also brought the start of another company that works in close partnership with SAO and that is Flybum Media Productions. Together, SAO/FMP is accomplishing some cool things....however 2010 is sure to be a blowout year in what we have planned to do.
In 2010, we already have trips booked up for a return to Alaska and our steelhead bookings are already into 2011. If you are interested in fishing with us, don't hesitate to call in advance to get the best dates. Also, if you are interested in Alaska 2011, we are headed back and taking deposits now.
The year has already got off to a great start with our show season under way. The first show for us this year was the 3rd Annual, Indiana On The Fly show in Indianapolis, IN. It was a great show with many great names in the industry in attendance.
I was fortunate enough to be invited as one of just a few presenters at the show, and so, I gave it everything I had....well, almost. It was nice to have such a packed house for a presentation...for those in attendance, you made it a blast!
As a part of the presentation, I had promised the founder of the show a brand new, hot off the press, highlight video of Steelhead Alley. I was pressed for time, but got the job done and I think we came off with a pretty nice finished product.....at least that is what I got for feedback.
So, looking to 2010, we are excited! Oh, and if you aren't excited about 2010, check out this highlight of 2009.....perhaps it will get your excitement going again.
(Click "Steelhead Gone Wild" below to see in wide screen)
Until next time, keep your eyes on the vise and fill your boxes.....or just get to the computer and edit some warmer season video. Regardless, enjoy the season and we will see you soon at a show near you!
Patrick "Flybum" Robinson
Head Guide
Steelhead Alley Outfitters
Posted by Patrick "Flybum" Robinson at 9:59 PM No comments: