A Good Couple of days on Steelhead Alley.

This week started with just about every one on the staff scouting rivers in Ohio and PA. The ice breakage has caused alot of the rivers structure and features to change when she broke free earlier this month. We took this brief advantage to sneak in a couple of trips before the weather turns for the worst later this week. 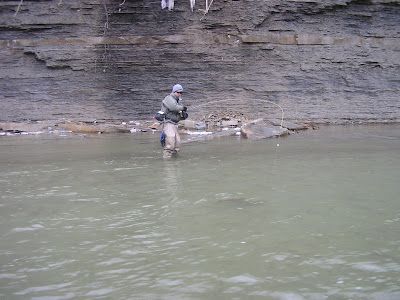 Lee Robinson up from Chicago fights a beast buck steelhead.

We started our day off early in the morning concentrating on lower Elk Creek. There were a good number of fresh fish migrating through the pools making for some exciting hook ups and producing some very good sized fish. We hit several miles of river and steelhead were spread out through the stream nicely. Just about every pool or deep river indentation was holding fresh fish. We did not hook very many old hold over fish the past couple of days(That story will be told below). Most were bright and the Big hens were fat, feisty, and still full of eggs. 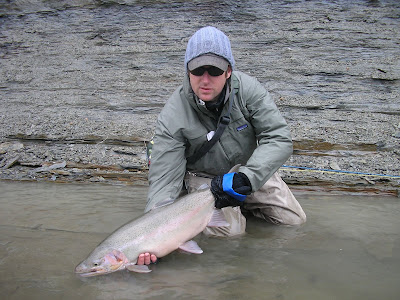 Lee's big buck of the trip!

We used several different fly patterns, but small yellow, peach, white, and brown eggs produced well in the morning. During the afternoon fish became very active and just could not resist a minnow imitation. Blue/pink and Tan/Orange Ice Man Minnow tubes, Crystal buggers, and emerald shiner imitations were the ticket and hooked alot of fish drifted under an indicator through the runs and pools. 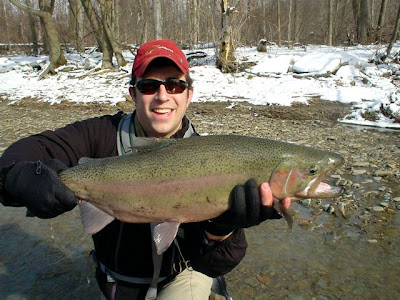 TJ with a nice buck of his own.
Our 2009 spring season has started Early this year and hopefully the weather comes in like a lamb instead of a lion. All of our schedules are filling nicely and if you are interested in fishing for steelhead this spring please don't hesitate to give us shout at 419-466-9382. Stay tuned for new listings of classes for fly tying, spey casting, and steelhead fly fishing here from the staff. Pat and I head to Colton Bay Outfitters tomorrow to tie steelhead flies and to talk steelhead and steelhead tactics.
Shop contact Information for this event can be found on the side bar of this blog. 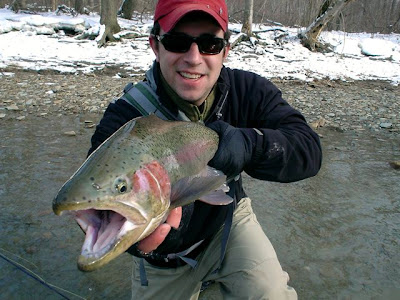 TJ with another good looking fish! 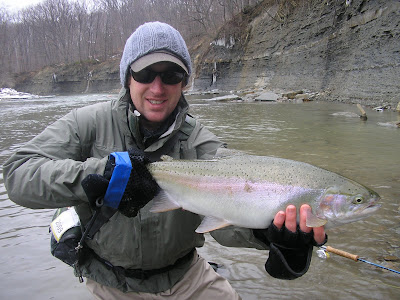 Lee with one of many fat hens caught the past two day.

Here are a few more photos from this week on the alley. We were able to scout and put eyes on just about every major steelhead stream in the region. The weather looks like its getting pretty nasty cold and down right windy and chilling, but things are looking up and we expect to have a great season. 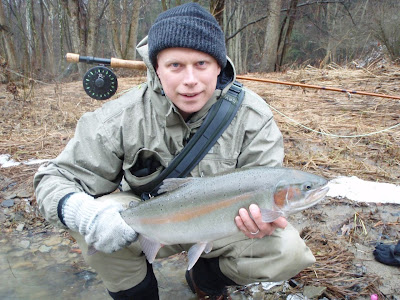 JP with a nice hen caught while fishing an Ohio tributary with steelhead guide John Clouser. 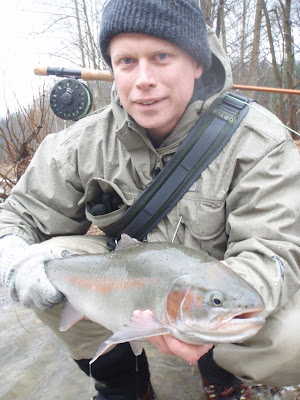 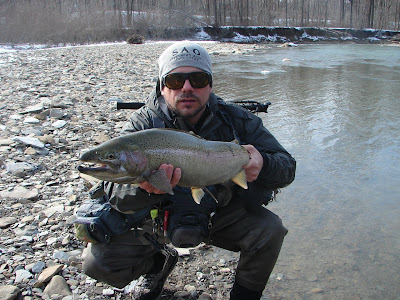 SAO Guide Tim Hess With a nice PA buck while scouting the rivers this week. 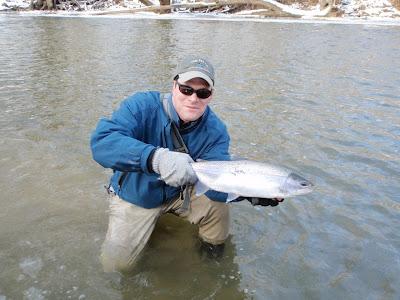 Below you will see a picture that I found quite disturbing! Elk Creek had formed nearly 11 inched of Ice on the stream during the cold spell, and when the ice broke and jammed the rivers, many of our hold over fish didn't survive. On one 25 yard section of river I seen over 100 fish killed by the moving ice fields. During the course of the day and 5 miles of stream I saw no less than 1000 fish dead. It really set it home how hard these fish work to survive during these brutal conditions. 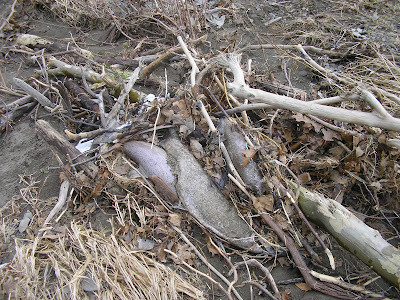 Steelhead all over the river killed by Ice jams

Posted by Steelhead Alley Outfitters at 12:14 PM No comments:

I have often asked the question, "Do Steelhead mean Spring, or does Spring mean Steelhead?"  Well, I guess only a steelheader would ask such a question.  However, either way you look at it, Steelhead are on their way up the rivers. 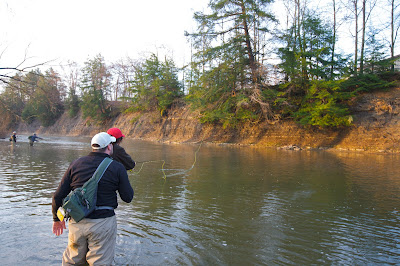 I love the spring season.  I thoroughly enjoy watching nature awake from the slumbers of a long, cold, snowy winter...all the while throwing a line.
Many anglers are getting out and today will be as good as any on the Alley for a preseason sneak peak.  We have guides out checking things out and looking for some early chrome Little Man's.  I'm quite confident that fish will be found. 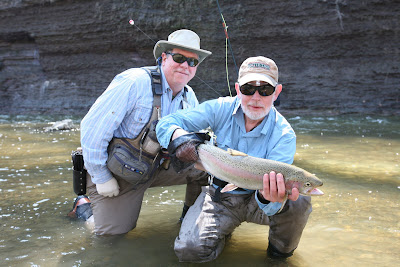 Here are some shots from the memoirs of last springs season.  Many great clients were shown the awesome waters of Steelhead Alley and all found success! 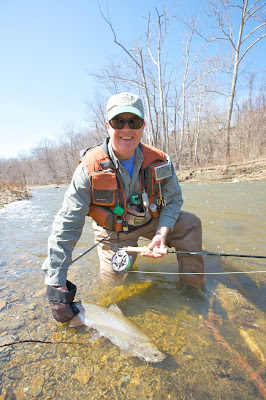 An angler from the East Coast grins with Steelhead in hand.  He and his comrades will be back in a few weeks to give the Alley a second shot.  During there first two day trip, they had stellar conditions and a high catch rate which provided for many photo opps like this. 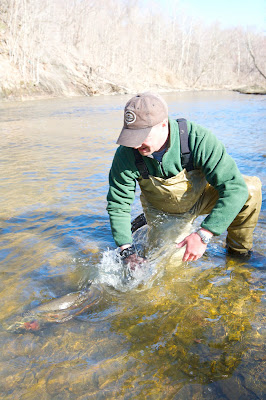 Here an average size Little Manistee Steelhead is caught and properly released as shown by the vigor in which this fishing is making his way back out into the stream.
Beautiful fish, beautiful scenery and the making of great memories is what my forecast for this spring is.  As I see it currently....the change of chrome is 100%.  I can't wait!
If you are interested in fishing and find yourself in need of a guide, please contact us as your convenience.  We still have some dates available, but now that the ice is out, things are filling fast.
We look forward to seeing you on the water!
Patrick "Flybum" Robinson
Head Guide
Steelhead Alley Outfitters

Posted by Steelhead Alley Outfitters at 8:08 AM No comments:

Right Around The Corner... 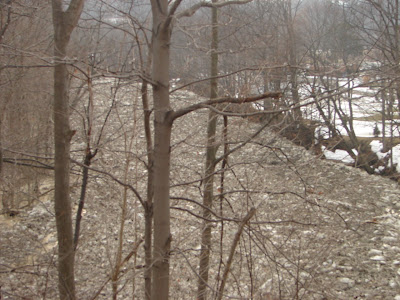 02-10-09 Elk Creek Covered in Ice from Rt. 5 to the lake.
Here in the next week depending on the weather we will surely all be able to scratch the itch and hit our favorite steelhead streams. Most are aware right now everything is high and unfishable in Ohio and PA. With a steady dose of rain in the forecast this will definitely help push ice out of the rivers. It was pretty amazing seeing the River "Glaciers" on Elk Creek! Here is a photo from yesterday by Tim Hess looking at Elk Creek below is house. The Ice jam was as far as the eyes can see!!! Tim said as of today the streams have opened up nicely but are flowing muddy for now, spring steelhead fishing is just around the corner. 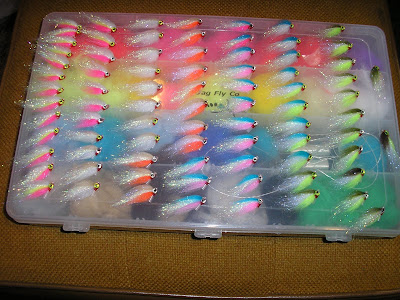 Easy Guide fly pattern for spring steelhead- The "Ice Man Minnow" tied on Eumer plastic tube.
See our fly tying blog for step by step instructions for this pattern..
We spent the off season tying and talking at some wonderful events, and concentrated on filling our fly boxes for the up coming spring runs. Coming up we will be at Colton Bay Outfitters in Ann Arbor MI and at Orvis Yorktown in Ill. Pat and I will be doing a fly tying Demonstration and Lake Erie steelhead seminar. Contact info for these events can be found on the side bar of this blog. 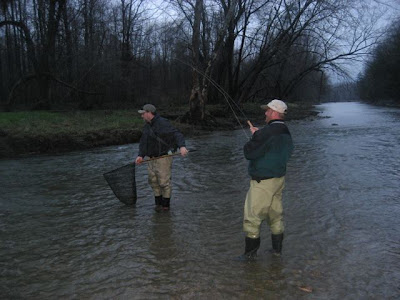 Angler Battles a Spring steelhead, while his guide waits with the net!

If you are interested in fly fishing or spey fishing for steelhead on Lake Erie tributaries, don't hesitate to give us a call 419-466-9382 to set up a custom steelhead trip.

Have a great Season!

Posted by Steelhead Alley Outfitters at 1:39 PM No comments:

The Emerald Shiner (Notropis atherinoides) is a Steelheading hot topic.  As many are aware, the Steelhead found on the Alley feed largely on this small but highly populated bait fish while in the big lake.
Whereas Alewives are a more important baitfish in other great lakes, Lake Erie's primary food source is the Emerald Shiner.  Although in decline, they are a source of food that should not be ignored in the fly anglers arsenal.  Steelhead become accustomed to feeding on these abundant fish in the lake and also find them available during their spawning in the spring of the year.
The fact that these little jewels are in the lake and also spawn into our tributaries at the same time as our Little Manistee's explains all the hoopla.  Here are some great facts I found on this Erie jewel.

Coloration: Live fish are a bright, iridescent silvery green with a silver midlateral band. The back and upper sides are greenish to straw colored, and the venter is silvery white. The dorsal scales are dusted with melanophores and have pigmented margins and clear centers. There is a variable middorsal stripe extending from the back of the head to the caudal base, and the head is diffusely pigmented with melanophores from the occiput anteriorly to the snout. The area between the nostril and eye lacks melanophores and only a few melanophores surround orbit. The lips are pigmented medially and the pigment continues about half way down the midline of the lower jaw. The cheek, suborbital, and opercle are silvery. A lateral band about 1.5 scales wide extends from the opercle to the caudal base, and is diffusely stippled anteriorly, becoming more prominent on the caudal penduncle. Scales along the side are bright and silvery. The dorsal, caudal, and leading rays of the pectoral fins are lined with melanophores, but the remaining rays and membranes are clear. No nuptial colors are exhibited by either sex (Ross 2001)

The rest of this article can be found at http://www.bio.txstate.edu/~tbonner/txfishes/notropis%20atherinoides.htm

Recently I have been experimenting with a more realistic way to tie an Emerald Shiner pattern.  The challenge is that I also wanted it to be a relatively easy tie.

Well, the fly below is the finished creation.  Designed with swinging in mind, I give to you the "Live Shiner."  It isn't much on the eyes when you look at it in it's raw form, but I think you will find that when compared to a true Emerald Shiner, it is a spitting image.

The tying style may look familiar to you if you have ever spent time in the salt, but this is no salt pattern.  It is for fresh water and fresh fish.  I'm sure this pattern would also work well on saltwater species, but on this day, it's an Emerald Shiner meant for big, fresh, Little Manistee's. 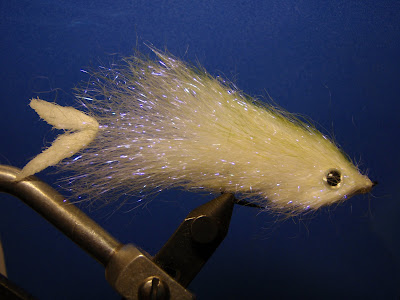 A "LIVE SHINER" TIED AND TRIMMED READY FOR WATER
After a relatively quick tie, the subsequent trim of the material, all that is needed is some running water to check profile.  If all is done carefully and with a steady hand, you will come out with a deadly replica that may stand alone when compared to the hundreds of other patterns fished on a regular basis. 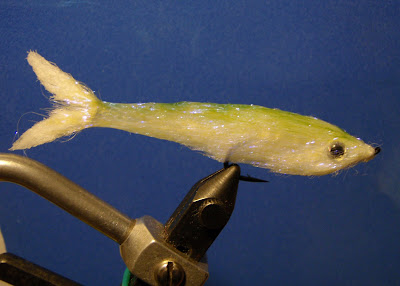 THE "LIVE SHINER" WITH WATER AND COLOR ADDED.
Again, we encourage you to take this time of locked up rivers to tie, create, fill your boxes.....and if needed, do some research to perfect your hunt for our potadromous friends!
Tight Lines,
Patrick "Flybum" Robinson
Head Guide
Steelhead Alley Outfitters
Posted by Steelhead Alley Outfitters at 9:55 PM No comments: