Just a few short days ago, I returned from one of my favorite places on earth...that being the great state of Alaska.  My first confession has to be that I absolutely love that place.  I think I could spend the rest of my days traveling to that place and always find something new to do.  This was my third trip hosting anglers to this majestic place and yet again, I found plenty of new adventure in this awesome place.  For many others it was all brand new and so were some of the smiles!  Here are a few of the big Alaska Rainbows caught on the Naknek River.

My second confession is that I have been sitting on a lot of great film from our trip to Alaska last year.  I have been sitting on it because we had thoughts of putting something in the Fly Fishing Film Tour for the coming year, but sometimes the best of plans just need to wait for another season.  That being the case, I thought now would be as good a time as any to start breaking down some of the footage and sharing it with all of you.  So, here is the trailer we put together for the film that we shot last year entitled Tight Lines & Tundra.  I hope you enjoy it as much as we did making it!

Until my next confession, tight lines!

It's that time of year again and I couldn't be any more excited about the next two weeks! 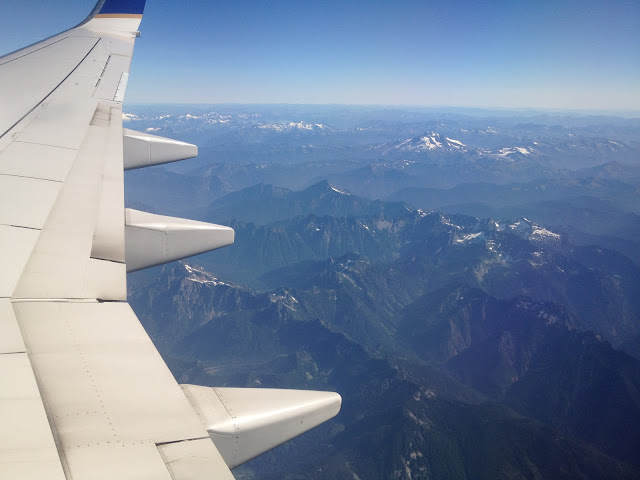 On descent into Seattle-Tacoma International Airport

As I sit here in the Seattle-Tacoma International Airport, I am once again dreaming of Alaska.  Only this time my dream is going to be realized once again.  Just a few hours from now, I will be graced by the mountains, rivers, and tundra expanses of that great state.

This time around I get to do it with a good friend and fellow guide Ben Barger.  This will be Ben's first trip to the great state and I am excited to experience with him.  Here he shows his excitement.  Ok, so maybe it was a little posed, but we are excited none the less! 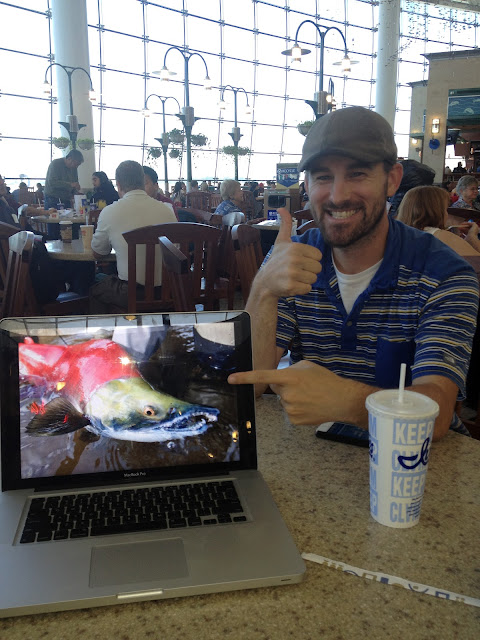 With ten eager anglers preparing for departure in the next couple of days, we are looking forward to a great week.  Jim Johnson, owner of Naknek River Camp just emailed me this morning and said the Rainbow bite is just about hit full speed, the Silvers are still being caught in good numbers, and Brooks River is fishing better than they have ever seen it!  That is music to my ears and many others too! 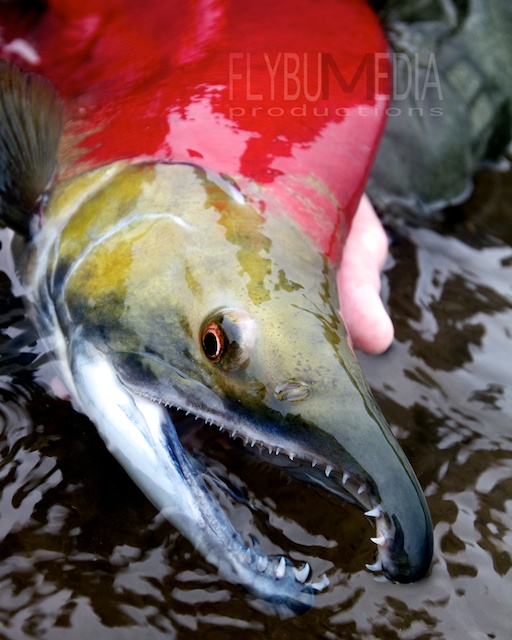 Sockeye Salmon...Some say they are ugly, but I kind of like their look!
Wouldn't mind one of these awesome fish on my wall personally. 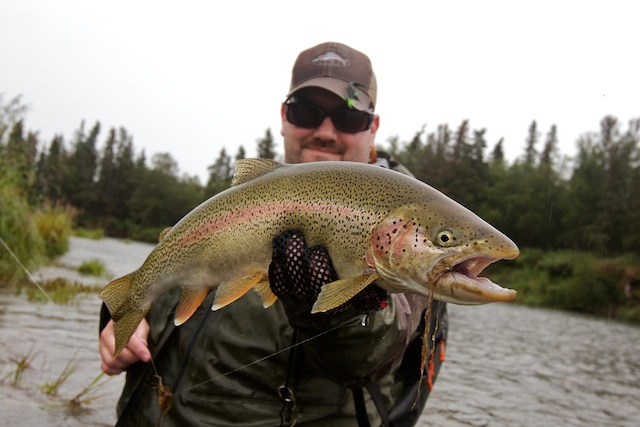 Greg Senyo holds a great Brooks River Rainbow.  There are
plenty more where he came from! 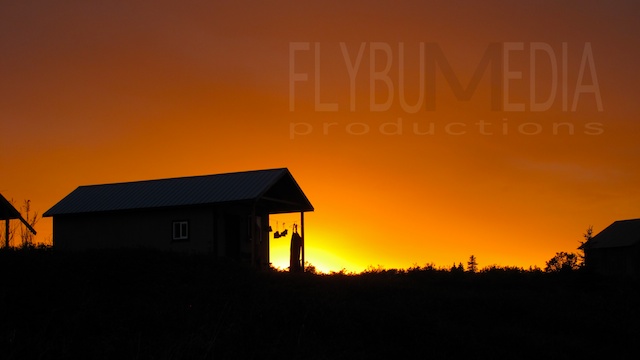 Mike Schmidt took this sunset photo while in camp last
year...kind of sticks with you if you look at it too long. 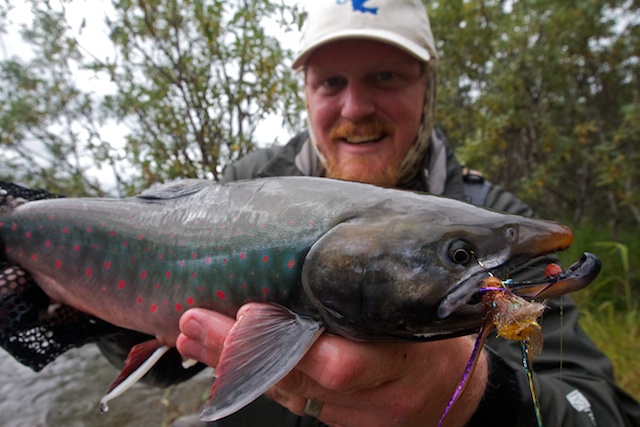 Mike Schmidt holding a gorgeous Arctic Char.
I don't know who this photo means more to, him or me? Either way
you slice it, we won't forget this fish anytime soon! 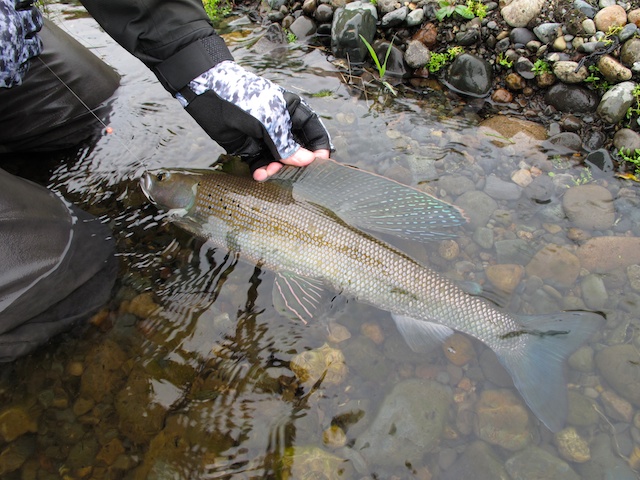 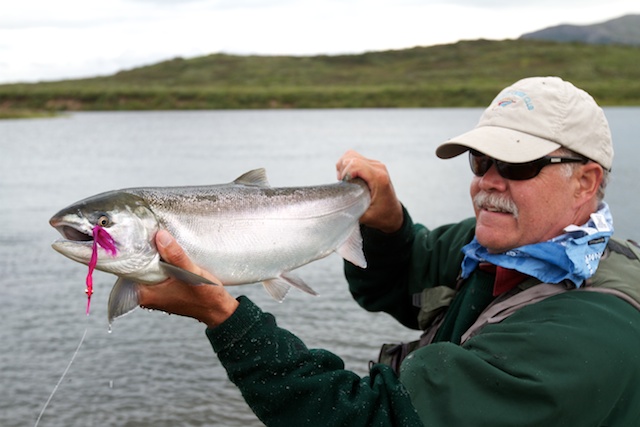 Ham hit his first Silver with me on one of our favorite stretches of water.
They are such suckers for cerise flies! 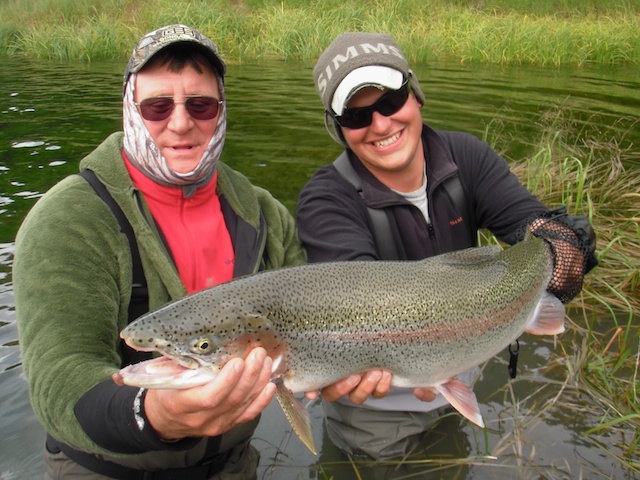 Mark slammed this monster Rainbow on the Naknek.  This trip we
hope to have multiple fish in this caliber to hand by weeks end! 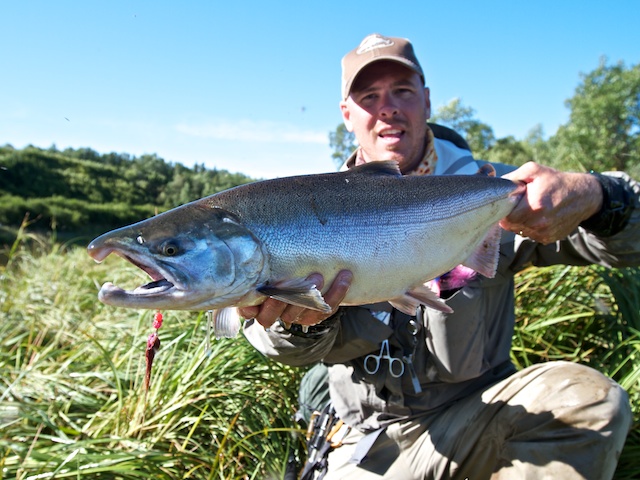 A great Silver came to my hands on this tidal creek.  Not a likely
place to fish this late in the year, but it was fun in August for sure!

This year we hope for a lot of the same with a few twists.  In the next two weeks, we hope to focus a bit more on a very overlooked fish and that is the Northern Pike.  They are in abundance on the Naknek River and her tribe, but are often overlooked because of the popularity of the Bows and Salmon.  This year we hope to add a few of these hogs to the mix. 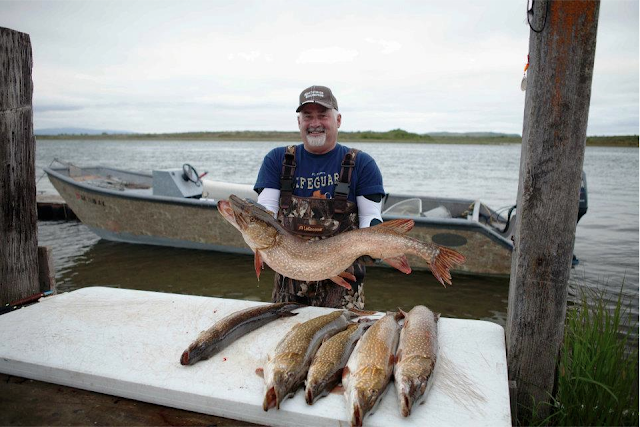 A few Northern Pike made it to camp earlier in the season, and
they have been picking them up like this all summer.  Hope to bag some
monsters on big flies in a day or two.

Also, another change up is my other passion in the great outdoors and that is bird hunting.  Last year I vowed I would not return to this great state without a gun and I am happy to say that my Benelli was checked at the counter this morning when I left Cleveland.  Ben and I plan to take some time after clients have headed for home to scope out the possibilities for Grouse, Ptarmigan, and the various species of ducks in the area.  If you are up for a world-class cast-n-blast, then keep your eyes peeled and ears to the ground as next year this may be a very good possibility! 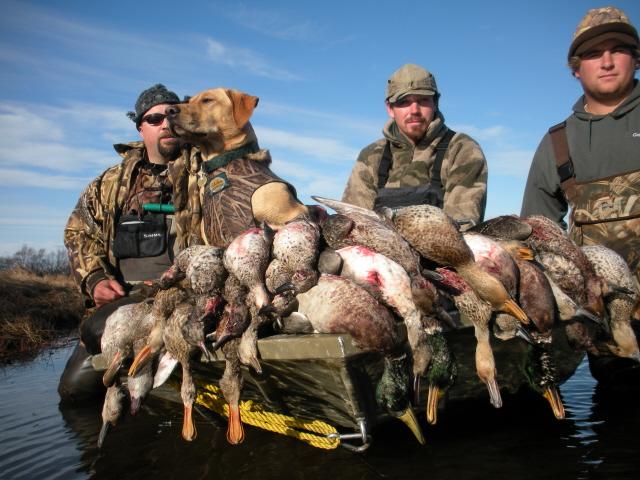 Here is a photo I found online of guys hunting ducks on the Naknek River.
This is one awesome example of a mixed bag!  And just
think, you could catch a 30" Rainbow in the afternoon too!

Well, that is all for now.  It's time to grab the bags and head for our next gate to catch the final leg of our flight.  To Jim, Wink, John, Leif, Tom, Cindy, Jim, Ken, Don, and Bill, we can't wait to meet up with you in King Salmon.  It's time to get some memories made.  See you soon!

Steelhead on The Horizon

Today marked the start of many outdoorsman's fall season.  With the start of many hunting seasons, families went afield by the thousands this morning, which means big fish are soon to follow.  Eyes are currently on a lot of beachfronts looking for the first cruising Steelhead and the phones are ringing off the hook with bookings.  If you are interested in getting out with a Steelhead Alley Outfitters guide, get your dates locked down soon.  Many of our  peak season days are filling fast, so don't waste time.
As many of you know,  we love our fall fish and with any luck we will see you on the water with fish like this soon. 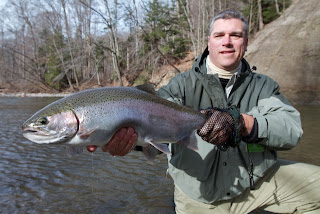 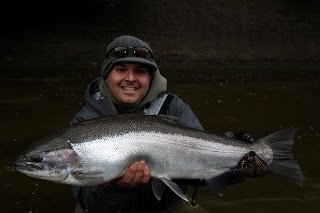 Also, our friends over at Chagrin River Outfitters have some great preseason things planned.  Make sure to take advantage of every one you can.

We look forward to hearing from many more of you soon!