The day started later than usual today due the threat of ice that was very real and persisted the first half of the day. About 1:30, all traces of slush and ice in the flow had subsided and we were once again free to fish as we would have liked to earlier in the day.
Below, Steve does the best he can to fish the flows of ice. 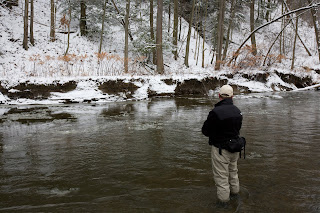 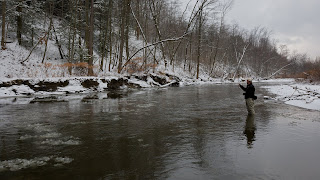 THE ICE FLOWS AROUND 10:30 AM ON THE ALLEY
Despite the ice, we were able to find some water that allowed for decent drifts. It wasn't to awful long before Rob, a first time steelheader, had his first piece of steel in hand. A nice buck to start the day brought warmth that only a true outdoorsman can understand. 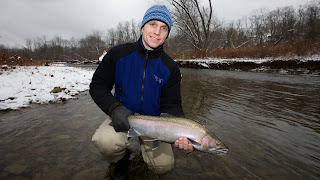 ROB WITH HIS FIRST STEELHEAD...
....TRULY ONE TO REMEMBER
The fish were slow to respond due to the colder temps, but in time, with a bit of diligence, things started to heat up and as luck would have it, the newbie had the hot hand for the day. I had just tied on my "Chicken Little" pattern for Rob and told him I would really like to get some photos of this fly with a fish. Rob was very willing to listen and nailed this heavy shouldered buck to get his afternoon session underway. 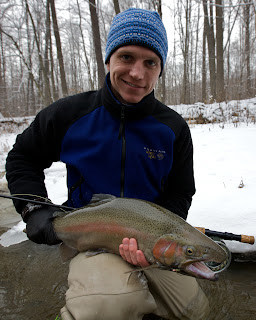 A NICE HEAVY SHOULDERED BUCK TAKEN
ON ROBINSON'S CHICKEN LITTLE
*Note: The Chicken Little is now available through local fly shops and the Orvis Company (click here) in three colors. If you are interested in giving it a shot, they can be ordered at either of the the above links. 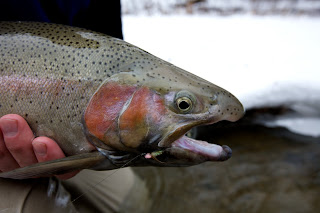 A DEFORMITY IN THIS BUCKS KYPE DIDN'T KEEP
HIM FROM MUNCHING AN AFTERNOON
SNACK OF CHICKEN LITTLE.
With the pressure starting to mount on the other side of this father-son duo, Steve decided it was his turn to put one on the board and he did so in fine fashion! This was a beautiful hen that looked to be full of eggs soon to drop. 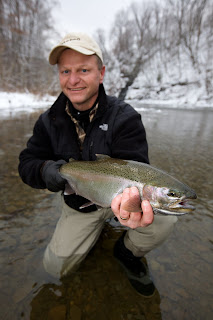 STEVE POSES WITH A BEAUTIFUL HEN 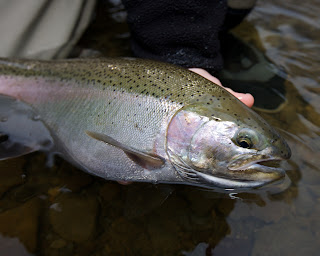 A CLOSE-UP OF A LADY WE ALL LOVE!
I don't know about all of you out there who read our blog, but I have to say that there is always something special about a father and son outing. They are the kind that hold a sacred place in every fathers heart and definitely hold a special place in mine, as I have sons of my own. Today, was special that way as Steve and Rob shared a beautiful day on the Alley! 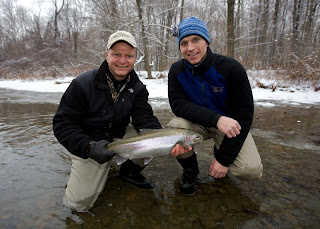 A FATHER AND SON SHARE IN SILVER AND SMILES
The day was drawing to a close and it had already been a huge success, but Rob decided he wasn't done! In fact, he felt the need to add some punctuation to the day and an exclamation point seemed to fit very well.
Just as we were making last casts, he proclaimed "there it is!" I looked up to see his rod doubled over and on the other end was a very stout hen that was sure to please. He handled her well and within moments we cradled her in the net.
All I can say is that it was a great way to end an already spectacular day! 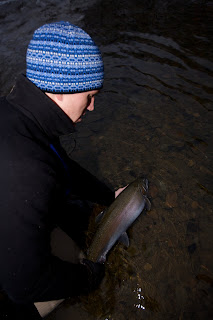 LOOK AT THE GIRTH ON THIS GIRLS BELLY 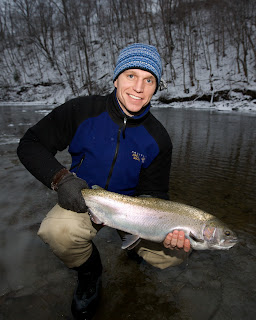 ROB POSES WITH HIS EXCLAMATION POINT CAUGHT
ON ROBINSON'S CREAMSICLE STONE
And of course, it wouldn't be a day without the cooperation of father and son holding onto a very nice memory making fish to end the day with. This is what it is all about....family, holidays, and memories of a lifetime! 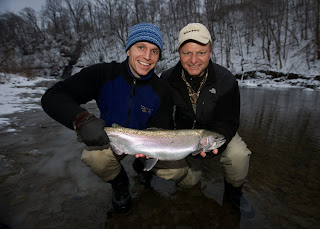 FATHER AND SON HOLD A MEMORY MAKER!
Today was a great day with slush and fish to be had. The hot flies for the day were Robinson's Chicken Little, Robinson's Creamsicle Stone, and various egg flies in orange and pink.
As the forecast looks, slush will continue to be an issue. However, with mildly cold temps, we may squeak out the holiday season with open water. If you want to get out with a guide, give us a shout at 419-466-9382 or simply book a guide in the sidebar of this blog. Otherwise, get out, have an awesome Christmas and a safe New Year.
From me to everyone that I fished with this year, thanks for a great year! I am officially done and headed home for the holiday. I can't wait to see many of you at the big show in Indianapolis after the first of the year. Greg and I will be tying, manning our booth, and I will be presenting in the main convention area....look us up if you are there.
Sincerely,
Patrick "Flybum" Robinson
Head Guide
Steelhead Alley Outfitters
Posted by Patrick "Flybum" Robinson at 8:32 PM