In the last installment of "Jet Lagged Confessions," I said that I would move onto fish and fowl, but that is going to have to wait as I forgot a few more fish.  So, bear with me (no pun intended) as we look at a couple of more fish topics.

One thing seems near certain from my experiences in Alaska and that is that there are Rainbow Trout in just about every stream and river an angler can find.  Now, that may not be the absolute truth, but is often the case.  In earlier blogs, I highlighted some of the slob bows that call the Naknek River home  during select seasons of the year.  In this blog however, we are going to look at the bows caught in some of the smaller streams of the area.  Each river seems to have its own unique kind of bow....some silvery, some peppered, some in between....each one unique, or so it seems. 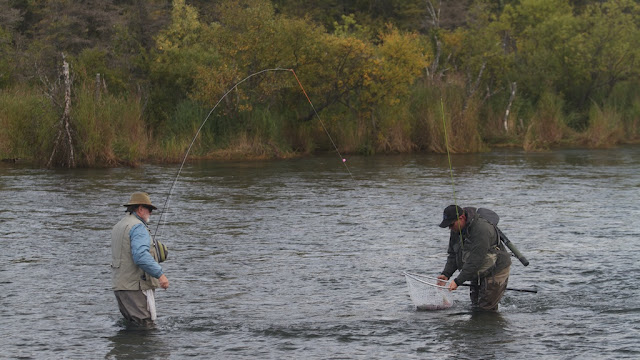 Jim comes up with a fish while guide Eric assists.  Everyone else just watches for bears.

The Brooks River is just one of a bunch of rivers loaded with Rainbows and this year the river was on fire!  Big bows and lots of them were to be had.  Most beaded, but those who came prepared absolutely killed them on the swung flies!


The bows aren't just limited to the Brooks, but can also be found in a myriad of other streams in the area.  Below are some bows caught in small stream off of Naknek Lake.


Along with Rainbows, many of these streams have healthy populations of Arctic Grayling.  Notorious for the spectacular dorsal fins they display, they are very willing to take beads, streamers, and are even a willing taker of dry flies!

Ok, so it's time for my confession....I know that many people are annoyed with catching these fish because it keeps them from the Rainbows that lay around them, but I must confess that I love fishing for these fish!  I am one who loves the beauty of fish.  That means that I want to catch all the species I can just to see the beauty they each contain.  Therefore, I must say that I love catching these things....especially on a dry fly!

The day we went to a small creek off Naknek Lake, I opted to take the days warm up to throw dries for these beautiful fish and came up time and again with Arctic beauties!

Fishing the small streams of Alaska is always exciting and dull moments are seemingly nowhere to be found.  That is part of what I like about going to Alaska!  The small streams are nearly endless to choose from.

If you want to see some underwater video of these fish in film we shot last year, go to our "Hosted Trips" page and watch the Contact Creek video....you will know these little fish when you see them underwater for sure.  I like to think of them as the sailfish of freshwater....albeit a bit smaller.

Until next time, tight lines...and remember to find the beauty in each fish!

Well, it's been a busy fall season and now that the holidays have arrived, I am going to finish up some blogging that slipped out of my schedule a couple months back.  Let's see, where were we?  We covered my love for Arctic Char, the fun of Alaskan Rainbow Trout, so let's pick up with part 3 which is all about the Silver Salmon.....and although it is one day late, I will reiterate the words of my UK friend Wayne who said, CO HO HO Merry Christmas!  I do hope each of you had a great day with friends and family and are getting some nice down time.

Getting back to Alaska, each year we head up to the Bristol Bay region Silvers are a targeted species but more so in August than in September.  This years trip was scheduled for September so big trout were the target, but much to our surprise, when we arrived, their were still fresh runs of Silvers coming in every day.  Not wanting to miss out on this fun, we decided to give chase and hunt down these anadromous beasts that were pulsing in with each tide.  As luck would have it, they weren't hard to find and were very willing to play!


Bill and I had a chance to spend some good time together on the water while there in Alaska, and much to our pleasure, the fish were often times liking our presentations.  Bill is always a great comrade to fish with as he doesn't take things too seriously.  Don't misunderstand that to mean that he isn't serious about his fishing, because nothing could be further from the truth.  He is however willing to laugh at himself and others when necessary and be thankful for the grab that didn't go his way.  That being the case, we had a couple of stellar days together and this is a just a few shots from that time.

We weren't the only guys to get out after the Silvers while there on the Naknek River system.  Whether it was us, other lodges, seals or bears, everyone had taken notice that Silvers were still pulsing in and found time to go after them.

All in all, the week or two I was there in camp the Silver fishing was surprisingly good.  In fact, it was phenomenal!  Of all the clients in camp, I don't think anyone went without catching at least a couple silvers with numerous guys catching several limits (5 fish daily) throughout the week.

It just goes to show you that these fish don't run based on the calendar month....so pay attention to your lunar/solar charts and other reports, because that could just make your "normal" week in camp look a little bit different than it normally does and that is the beauty of Alaska...there is always a surprise in store!

Next time we will look at a few different topics from fish to fowl and everything in between.  For those interested in hitting Alaska with us, we are making our return in September of next year on the same week as we have been several times previously.  We didn't make these dates public until just a few days ago via Facebook due to our high rebook rate.  If you are interested, we are heading back to Naknek River Camp for the week of September 7-14, 2012.  Email Patrick Robinson at flybum@windstream.net for more information on how you can get on the team for this awesome trip.

To see some video of past trips, go to the "Hosted Trips" page.  If that doesn't get you excited I don't know what will.