The cold weather continues and therefore, so does the fly tying!  In between tying what we need to, we will often times try to come up with some newer flies.  Today was one such day. 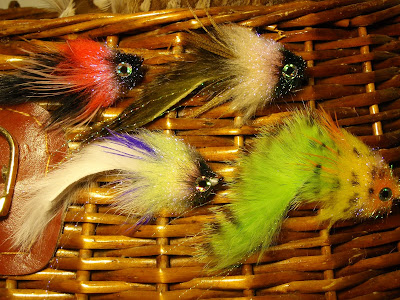 Here is a picture of a few of the first in a series of Robinson's Munchable Minnows.
Integrated into some of these patterns is Senyo Laser Dub...a new signature material developed by our very own Greg Senyo and manufactured by Hairline Dubbin Inc.  The material is available through Orvis and will soon be available through your local vendors. 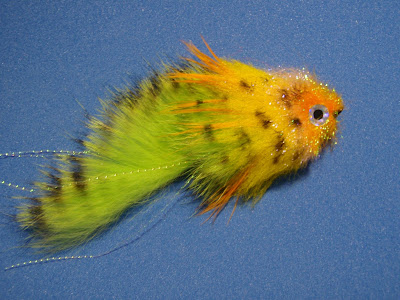 The Munchable Minnow - Pumpkinseed
The above fly will prove deadly on different species of Bass, but don't dismiss it as a viable Steelhead fly.  In dirty water, I'm quite confident that the old Pumpkinseed will produce.
Below you can see a bit of the profile of this fly.  It is very narrow to better imitate the true nature of most baitfish of small gamefish. 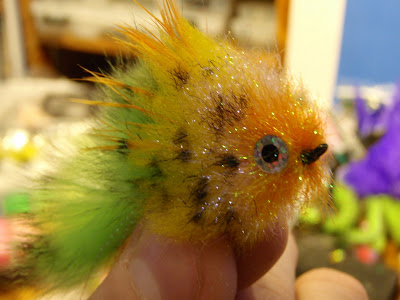 Another color combo in the photo that proved deadly during high muddy water this past fall. 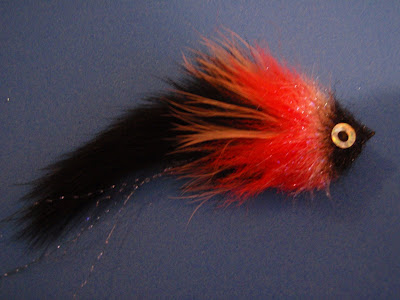 While the ice fishing is in full swing, get to that vice and get prepared for the thaw.  If there is any way that we can assist you in that, feel free to drop us a line.  We would love to help out in any way we can.
Tight Lines,
Patrick "Flybum" Robinson
Head Guide
Steelhead Alley Outfitters
Posted by Steelhead Alley Outfitters at 5:51 PM No comments:

This weekend, the team split and headed off for the start of show season.  It was a good weekend as far as shows were concerned, but tough on the travel conditions.
Greg, Will and myself all headed for the show in Indianapolis called "Indiana on the Fly."  Let me just say that the organizers in Indianapolis put on a quality show.  There were many, many quality vendors and exhibitors in attendance, which is probably due to their "by invitation only" method of operation.
Everything from Steelhead to fishing in Scotland was represented and big names such as Bob Clouser were also in attendance which is always a crowd pleaser.
I always enjoy getting to the shows and networking with old friends as well as new.  I also like the opportunity to learn something new...it keeps you sharp and on top of your game.
While we were in Indianapolis, Graham, Jeremy, and John were in Cleveland at the North Coast Fly Fishers fly tying exposition.  As we understand, it went very well.
Here are just a few photos of our show experience.  I would have liked to shot more photos, but I was to busy with the crowd and tying to do so. 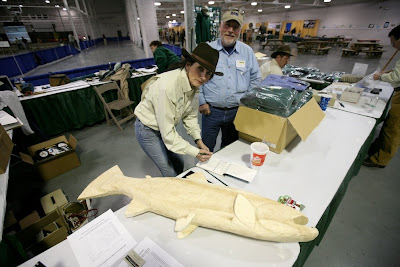 Our lovely hostess Patti at the end of a successful show 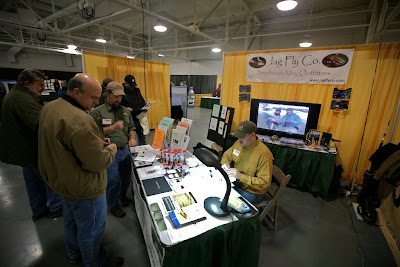 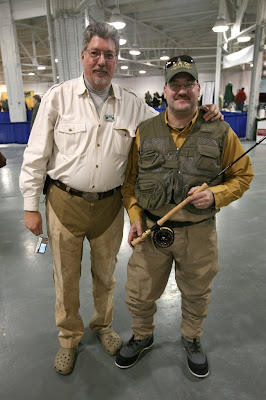 Greg poses with Orvis store manager Gary after a nice fashion show in which Greg was very vogue! 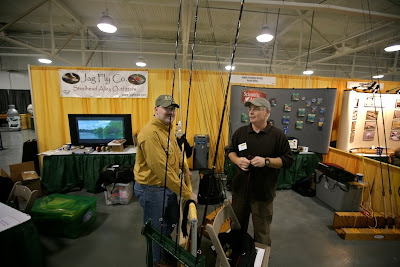 Greg and Jerry Darkes speak as we begin tearing down. 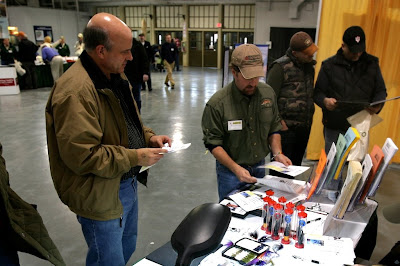 Brian Flechsig hands out literature at the booth. It was good to have Brian and MRO represented with us this year.
Currently we are back home and watching to see what the streams do.  Unfortunately, based upon the forecast, I think all we will see is the ice getting thicker.  I guess it is that time of year, so we are taking advantage of the shows and time for tying.
We suggest you do the same.  Go learn a little something new and tie some flies and we will keep you posted on what we are doing and what we know.
Keep your eyes on our fly tying blog as we will be posting new entries weekly during the show/tying season. Click here to see it  www.steelheadalleyflytying.blogspot.com
If at any time, you have questions on our ties or perhaps you need that selection of flies for the coming spring run, just give us a call!
Until next time, stay warm!
Patrick "Flybum" Robinson
Head Guide
Steelhead Alley Outfitters
Posted by Steelhead Alley Outfitters at 3:33 PM No comments: A Brisk but beautiful morning on Steelhead Alley.

Well the guys were out fishing this weekend, and had some amazing days on the water!! JP with SAO guide John Miller cracked a few bruiser fish to start the new year off in dramatic fashion. The Buck JP caught was the largest steelhead to date for him, Congrats JP on such a hog!!!( pics below)

This weekend we will be at the "Indiana on the Fly" show in Indianapolis as well as the North Coast Fly Fishers show in Cleveland. This years show in Indianapolis was moved to a larger facility inside the Indiana State Fair Grounds, and will feature only the best and most successful Fly fishing services, shops, Individuals, and companies in the Industry. Our booth will have exciting video's of steelhead alley, hands on custom fly tying, personalized guide trip information, free hand outs, and more information made available about steelhead alley by our guides than could possibly be obtain from this or any other website. Will Turek will be providing an in depth spey casting demonstration and be available afterwards to discuss the spey method and provide info about the Mid West Spey school and its classes. I will be providing information and in depth demos on tying tube flies for the Great Lakes region. This show is one not to miss!!!

For information go to http://www.reelwomen-reelmen.com/ 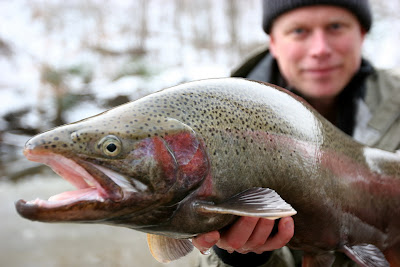 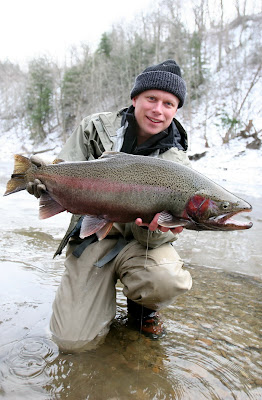 Another view of JP's January hog!!!! 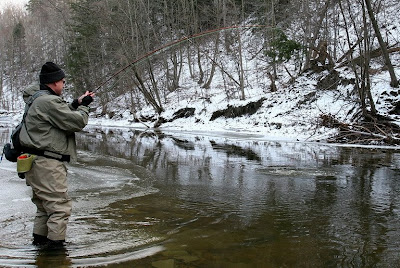 JP battling the biggest steelhead to date, while SAO steelhead
guide John Miller captures the moment...
We will have several new fly assortments available before the spring runs, and pretty much all orders are done, mailed, and caught up..Thank you for your orders and patience!!! Our fly tying blog right now is my main focus, and I have begun to get all requested patterns photographed and recipes up! Thank you for all the great feed back!!!
To visit our tutorials go to : http://www.steelheadalleyflytying.blogspot.com/
If your interested in hot new steelhead products and my new material, "Senyo's Laser Dub" manufactured by Hairline, and an Orvis exclusive, please visit an Orvis affiliate fly shop near you. 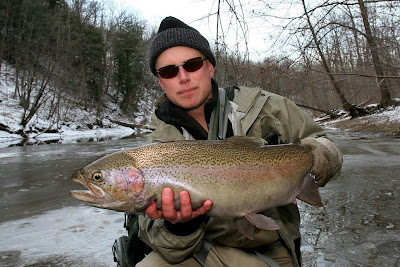 JP with another January steelhead, this time a hefty Hen that took a streamer pattern. 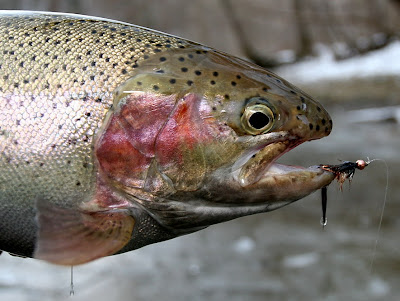 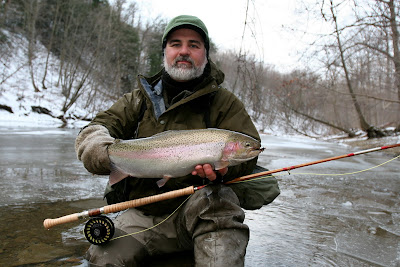 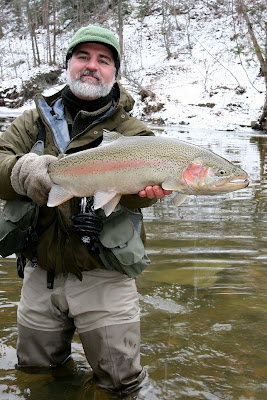