Happy Halloween! Looks like low and clear water conditions going into November... There are plenty of fish in the Lake Erie Tributaries, but a steady dose of rain would make fishing for them that much better, and we could use a few more good pushes of fresh fish from Lake Erie to make it good fall season. Time to tighten those laces on your boots, because hiking to find willing and unpressed fish is on the horizon... I still believe the best fall fishing is still to come!

We are on the water daily and at times are finding it tough to get to the phone until our trips are completed, please leave me a message and I will call you back after 5pm each evening.

Chagrin River Outfitters now carries just about every custom fly we use daily while guiding on Lake Erie. Eggs, nymphs, buggers, and swung fly streamers all custom created by us are available daily at the shop. 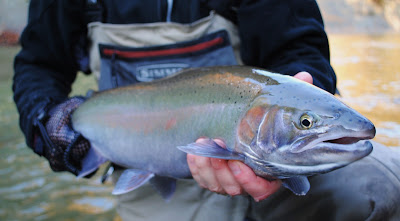 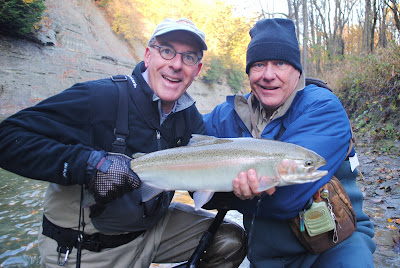 Harry and Jim Share a pose with one of the Steelhead they caught! 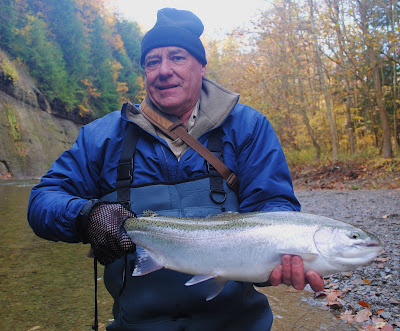 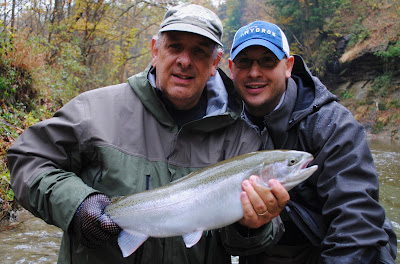 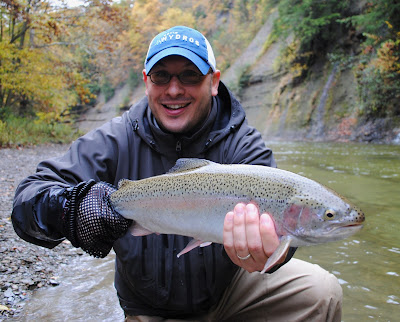 It didn't take long for Aaron to get his first Steelhead as well! 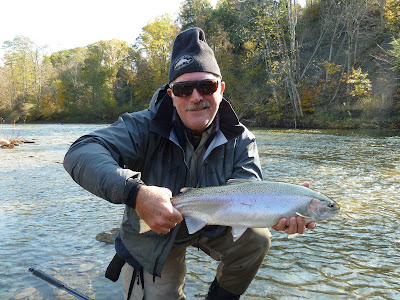 Mark with a hard earned Lake Erie Steelhead! The fish were hot on this day, with plenty of long line releases and powerful jumps! 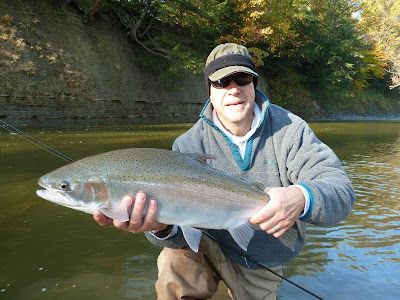 All I can say is this...I love it when conditions agree with clients plans. I don't know about others experiences, but I know the disappointment when you book a guide only to show up and have blown out conditions, or the birds aren't flying when you booked the hunt...it is a big let down. Well, today was no such day, and I have to say that I revel in the excitement of days like this.
Leon and Jamie were both first time Steelheaders, each looking for that explosive experience that they had both heard about. As their good fortune would have it, the fish were there, were being very cooperative and were eager to please.
Congrats guys on a great day and first fish! 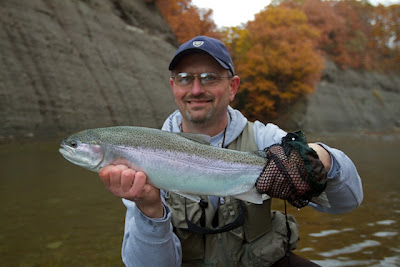 Jamie holds his first Steelhead...a pretty hen was all he needed
to get his pulse elevated and the blood pumping hard! 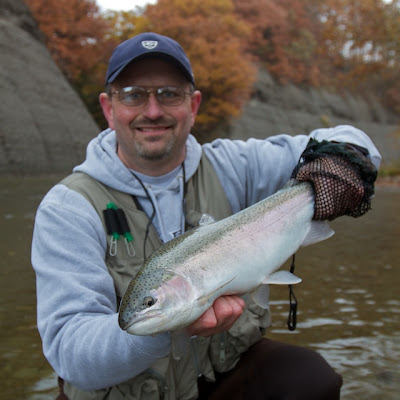 The pink hue mixed with the chrome flanks was gorgeous! 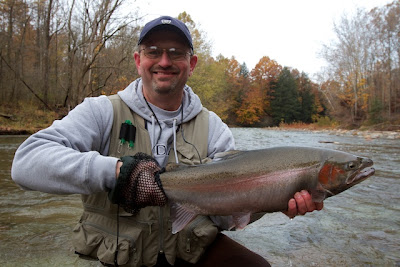 One hen down, so why not take a closer look as a
big buck with plenty of attitude and color too. 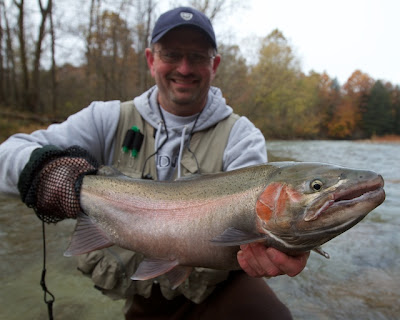 Jamie poses with pride and a handful of fish. 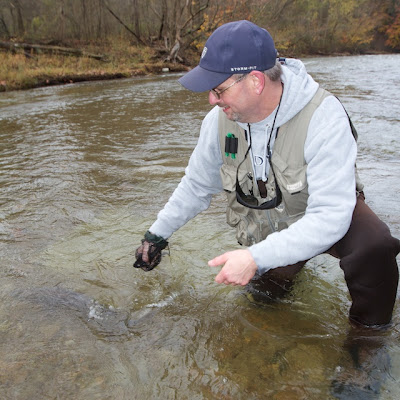 The release to fight another day... 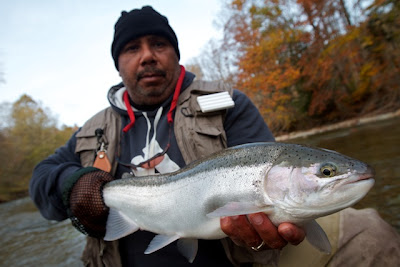 It wasn't long before Leon decided to join the party...and join
he did. Way to up the ante Leon with a stunning piece of Chrome!!! 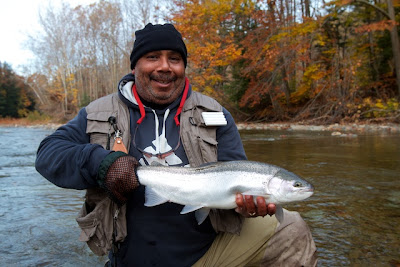 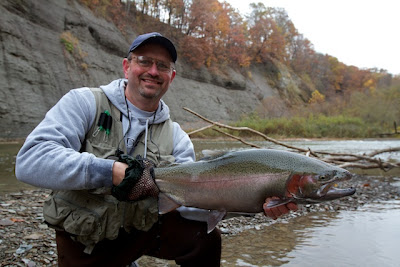 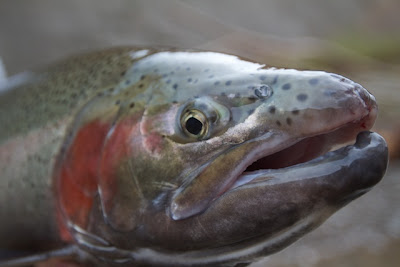 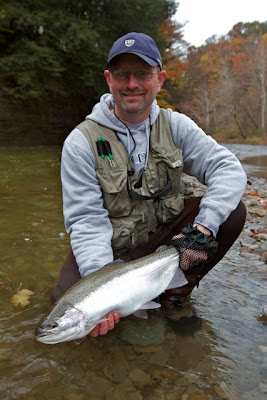 One heck of a way to end a day!
The fish are in and conditions are prime for fresh Chrome. Get out when you can and look for fish in all the likely holds. They weren't hard to find today and that is always a great thing!
Until next time, best of luck and may all you fish be bright!
Patrick "Flybum" Robinson
Head Guide
Steelhead Alley Outfitters
Posted by Patrick "Flybum" Robinson at 5:28 PM No comments: 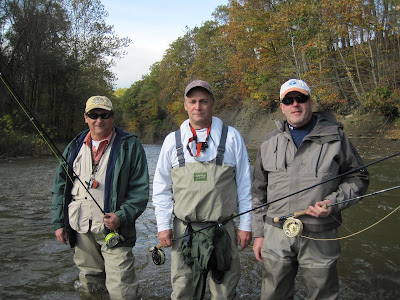 Blaine, Jim and Todd
I recently had the opportunity to spend a day on the river with a group of guys who share a few commonalities. First they are family and second they have a passion for fishing. But it was their friendship that shined through during a tough day on the water. 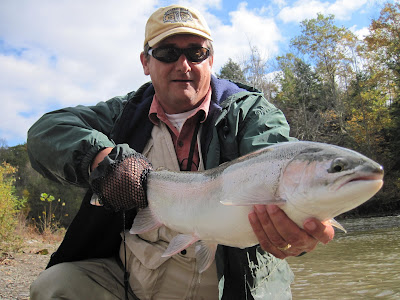 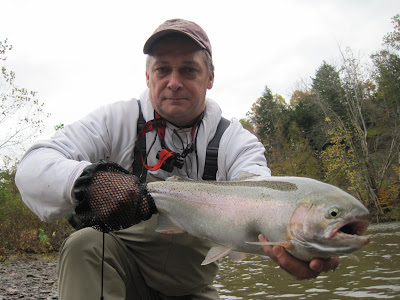 Jim with his first steelhead on the fly! Congrats!!! 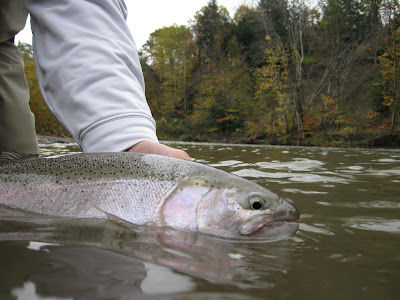 The unforgettable release
I want to thank these guys for the good time I had and the privilege it was to spend the day with them. And thank you for allowing your friendship to make a seemingly impossible day unfold the way it did.
Until next time....
Tim Hess
Fly Fishing Guide
Steelhead Alley Outfitters
Posted by tim hess at 11:34 PM No comments:

Every now and then, the rivers rise, fish pour in, and nobody can go fishing when the waters are hot on the Alley. I know that sounds bad, but that is called life for many people in today's hustle and bustle of society.
Yesterday was just such a day. I knew the conditions were going to dial in, so I started the task of calling my regular clients to let them know that conditions would be great. After exhausting all my possible leads and not finding a single soul that could break away for the day, it was time for a father to make a call.
I have children as many of us fly fishers do and just like many other fathers, I too would love to pass my passion for this sport on to them. That being the case, there was only one thing left to do. With trumpet fanfare, I announced to my two oldest children (ages 10 & 12) that they would not be going to school tomorrow. That statement was met with a bit of confusion that quickly turned to excitement when I told them what the plans were for the following day. I'm not sure why such excitement...but I suspect it had something to do with no school and fishing with Dad.... :) In that moment, one thing was certain...there was no arguing but only an attitude of father knows best!
Knowing that they were pulling very solid grades, I wasn't really worried about them missing some school for time with Dad. My daughter had been out a handful of times with me and hooked up on some fish, but that first piece of steel had continued to elude her instead leaving her only with lessons learned. With that being the case, the first and most important order of business for our time together was to get my girl a fish!
It wasn't long after hitting the water that all of her fortune changed. With the skill of a seasoned angler, she made a cast exactly where I told her the fish would be holding and the rest she handled with a very cool hand. Moments later, this Dad got to share in a memory he will cherish for a lifetime! 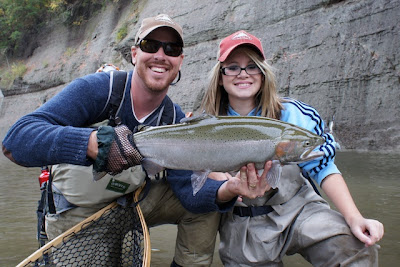 Patrick Robinson holds his daughters
first Steelhead on the fly. 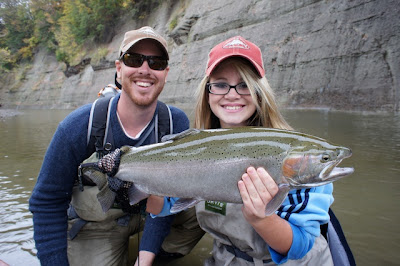 She is a real fly gal and wanted to pose holding her own fish! 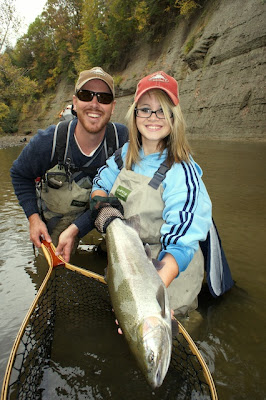 Another pose that she really likes and will likely share
with all of those near and dear to her. 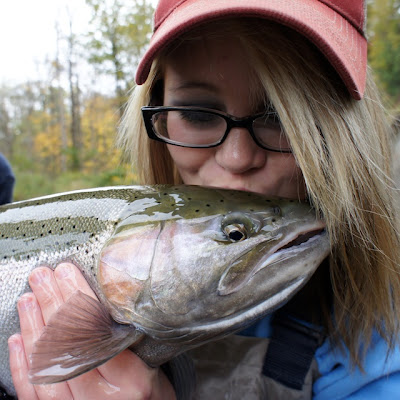 And yes, every first Steelhead deserves a
kiss...especially from a pretty girl!
This is what it is all about really. Spreading the love of the sport to those coming behind us is part of the tradition of this great land!
If you have children, there are still many great days of fishing to be had this fall. Make sure to take the opportunity to get your kids out for some memory making. Trust me when I say that you won't regret it.
See you on the water!
Patrick "Flybum" Robinson
Head Guide
Steelhead Alley Outfitters
Posted by Patrick "Flybum" Robinson at 7:01 PM 2 comments: 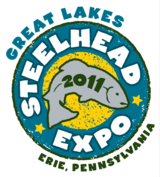 Steelhead Expo Website
The Great Lakes Steelhead Expo taking place on November 5th, 2011, is an event centered on the steelhead fishing experience in the great lakes. We are a group of conservation minded fisherman and women who are dedicated to protecting the water and resources that make our fishing experiences possible. We will have the top vendors and companies on hand to show you the latest and greatest fishing products, guides to tell you about their fisheries, local clubs doing fly tying, casting and more, as well as folks from the various fish and wildlife services that represent the great lakes.

When the going gets tough.......Strip a Woolly Bugger!

Conditions as of yesterday were extremely tough. Low, gin clear water makes for a long day dealing with spooky fish. But, as of this writing, the river flows are slowly climbing with today's rain and I expect the PA flows to be well sustained over the next couple of days with the pending forecast!

With that being said, back to the fish. Long, somewhat stealthy casts were the ticket to entice leery chrome. Stripping woolly buggers across isolated pockets and deep pools triggered quite a few follows and some pretty exciting strikes! The trick was not to alert them to your presence to quickly. 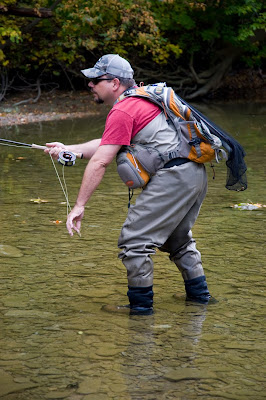 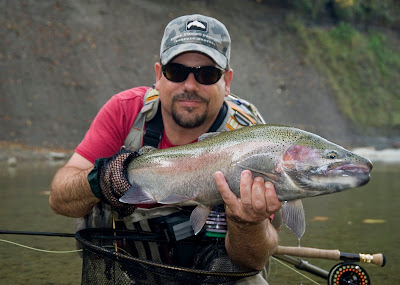 Persistence pays off, a nice male falls victim to a black woolly bugger
Well, I hope with the much needed rain we begin to reach stable and fishable flows on the local rivers. Never less, it is always enjoyable to be doing something you have a passion for. If that passion strikes you, give us a call and get in on the action! I hope to see you all on the river in the coming months! Until then...
Tim Hess
Steelhead Alley Outfitters

Lake Erie Sunset.
The Lake Erie Tributaries are getting pretty skinny in both Ohio and PA. There is rain on the horizon, but nothing significant is forecasted until at least Thursday night.  By now most of the steelhead that were brave enough to enter the streams have become extremely spooky with no place to hide. The fishing will get better toward the end of the month, and hopefully we see enough water to flush out the yearly leaf hatch, and sustain a great fall run. ﻿ 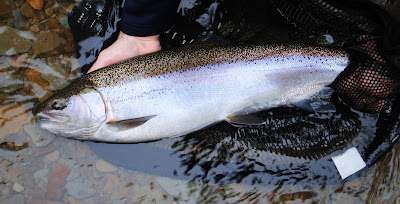 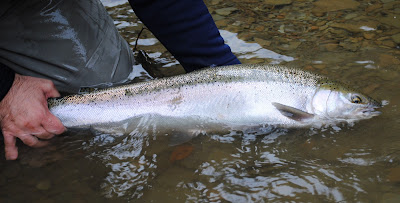